A while back I posted about a Mulch Calculator that I made in PHP and how I would spruce it up for use at the greenhouse. While it was a helpful tool, only one worker actually used it because he was the only other person with a smart phone and the idea of having to go to the bookmarks and search for it was a bit much for the other non tech savvy employees.  This isn’t the way I wanted this to turn out so I went back to the drawing board.

I really wanted people to get some use out of the tool so before I started I sat down and made a list of everything I wanted to see in the new calculator and things I thought were important for people using the calculator. Here is what I came up with:

I researched mobile app JS libraries that would allow me to make a single page app and I came up with jquery mobile as the easiest solution. I’ve used Sencha touch before but thought that the former would be quicker to get the app up and running before going back to my day job. It took me one day to finish the app itself and I’ve been working on the app landing page since.

I figured that it would be nice if there could be a way for the customers too so I generated a QR code that would take anyone with a QR reader to download the new landscape calculator. I threw the images in GIMP and added some pretty colors and this is what I came up with. 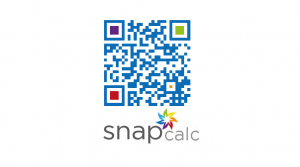 Hmmm… I think I’m being summoned to help in the kitchen. Back to real life. Here is the link to SnapCalc if you want to give it a shot.

And if you want to put SnapCalc on your website, you can copy this snippet into right into one of your html files and it will take your readers to the calculator.

Botanophile is brought to you by…